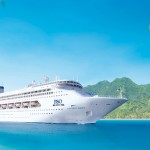 2015-4-1: The Pacific Dawn will be the first ship to go ashore on Vanuatu since the devastation of Cyclone Pam. (PHOTO Courtesy of P&O Cruises)
Cruise passengers are returning to Port Vila on Vanuatu this weekend following the devastation caused by Cyclone Pam in mid-March.
Passengers departing Brisbane, Australia, on April 4 on P&O Cruises’ Pacific Dawn will be first to go ashore in Port Vila, which the company said has been confirmed as safe for visitors.
The Pacific Pearl will follow three days later, and both ships will continue to deliver humanitarian aid and building material to support reconstruction efforts.
Tropical Cyclone Pam