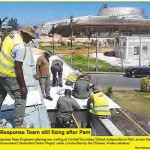 Len Garae, Daily Post
Vanuatu’s Ambassador to the European Union Roy Mickey Joy has assured the Commonwealth secretariat in London that plans have not changed and Vanuatu will host the Commonwealth Heads of Government Meeting in 2017.
The Ambassado made the confirmation in his meeting with the Prime Minister in his Office.
He said after the CHOGM meeting in Malta in November of this year, there after is going to be a “very busy period for Vanuatu”.
The Government machinery is going to prepare the country’s biggest challenge yet, to host the next meeting which is expected to attract 54 Heads of Governments and