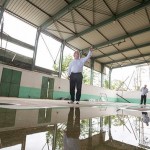 Mainguy, first elected to the post in 2011, is a former Oceania Davis Cup tennis player who is currently head of Vanuatu Tennis and vice-president of the Oceania Tennis Federation.
He will continue to work alongside VASANOC President Antoine Boudier to engineer the sporting recovery effort following the devastating impact of Cyclone Pam in March, with