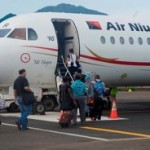 Papua New Guinea’s National Flag Carrier, Air Niugini is set to make its maiden commercial flight into Vanuatu capital Port Vila, this Wednesday 24th June. This comes as Air Niugini seeks to open up new routes in the Pacific Region and other overseas destinations. The new flight is been made possible under the tripartite code share arrangement between Air Vanuatu and Air Solomon Islands. Air Niugini will use its Fokker 70 series to expand this service to Port Vila via Honiara, Solomon Islands, as announced by its Board Chairman, Sir Frederick Reiher,