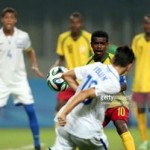 Posted by: Richard Butler on August 4, 2015 in Investment, Oceania Leave a comment 376 views 0

Ronaldo Wilkins in the 5th and 6th playoff between Vanuatu and Honduras at Youth Olympic Games, Nanjing

The Phoenix Academy would like to welcome Vanuatu young superstar, Ronaldo Wilkins to Wellington, New Zealand.
Ronaldo who was part of VFF Football Academy program at Teouma last year will be based now at Scots College for his schooling and will participate in training sessions for the Scots first 11 and the academy.
He played for Vanuatu in the OFC U-17 competition in American Samoa early

Previous: Japan gives millions for Vanuatu port development
Next: What to Do in Vanuatu: A Day Trip Primer.